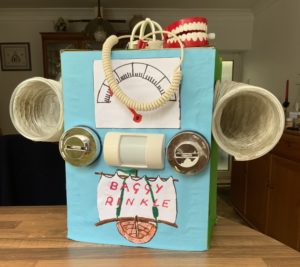 The giggleometer is fully stereoscopic with two high performance laugh receptors fitted at a level compatible with most size chuckle muscles. Although free standing it has shoulder straps and a tonsilar bracket and can be fully integrated using the patented “Gobsticker” function which has been fully passed by our resident medical advisor.
It has full range measurement from titter up to hysterics with an overload system unique to any other systems.
Measurements are reported in the new standard British unit of noise the baggyrinkle (baggy) 1 baggy = 20 decibels)
It comes complete with a pair of stereo calibrators and has a low level sensitivity that is even capable of detecting a grin.
Set up procedures are simple but if you have problems reading joined up writing you can contact Dave our technical manager for expert advice.
It is fully portable and comes with it’s own carrying case and stand and can be set up in pubs halls lighthouses ships trains in fact anywhere that you may be required to sing.
It complies with recent EU laughter regulations as negotiated by our expert joker Boris and is available from our Welsh laughter factory and subsidiaries in France and New Zealand.
Baggyrinkle is a limited company (limited only by age and ability) For orders please contact our company secretary at our Birchgrove headquarters.
John Brown's Daughter!!!!

The challenge was to write a topical verse : March 2020

DJ
Dominic Cummings, a man of high renown.
Dominic Cummings, advisor to a clown.
He likes to test his eyesight by driving up and down,
with his family in the car.
Chorus.
Glory, glory is that bullshit I can smell.
The country’s in a hand-cart and it’s on its way to hell.
Glory, glory yes it’s bullshit I can tell,
and it’s deeper every day.
Ken
John Brown’s daughter still works out in the street
She practices social distancing from every one she meets
So is it any wonder she cannot make ends meet  As she goes rolling home

John Brown’s daughter puts on her PPE, Her scrubs, her gown, her mask and gloves and all the rest you see But what the hells she going to if she wants to have a pee, As she goes rolling home
Terri
Wales is full of beauty, It’s language like a rhyme,
It’s countryside, it’s beaches, they really are sublime.
But Wales is for the Welsh me boys, you’ll have to wait inline!
Don’t you cross that bridge!
Andy
This new coronavirus, it has brought us to our knees
Hats off to other Nature, she can do just as she please.
But Human interference is killing us by degrees,
As we go blundering on
Glory, glory hallelujah
I wish the government had acted sooner
They stonewalled and they lied
And forty thousand people died
As we go blundering on.
Gareth
The Government ‘s inaction has left the country cowed,
No PPE, they’ve no idea, we live under a cloud.
Over 60,000 dead nd the PM says he’s proud,
What fucking planet is he on?
Black Lives Matter are marching through the town,
They need to have their voices heard, to tear the racists down.
Smash all the statues pull the icons to the ground,
It should have happened many years ago.
Alan
Boris Johnson bought a Covid 19 Testing Kit,
He pushed the swab right down his throat too far by quite a bit.
Cos when he pulled it out – it was plastered all in shit,
(But we are so used to that particular organic material emanating from his mouth that no-one noticed).
We listened to the medics and the scientists and all,
Wash your hands and stay at home it drove us up the wall.
But they filled us up with clap-trap and thousands they did fall,
Incompetent, useless Gits !!
Pat (terri)
Pat Smith is a valley girl, a folkie through & through,
She runs a little folk club, plays concertina too!
Pat Smith is a valley girl, To hear this isn’t new!
Get your Knockers out for the boys!
Tony
Bojo thinks he’s Churchill, fighting a bloody war
But the strategy is suspect and his tactics are quite poor
Serco are doing public health,  the doctors are no more
And the bug’s killed more today
Tiny Mattie Hancock would rather not be there
He looks a little frightened and he’s losing all his hair
He can’t add up his test kits, his targets are laid bare
As a public enquiry looms
Lovely Helen Whately really looks so out of place
Her media skills are awful, despite her lovely face
No questions can she answer, Piers thinks she’s a disgrace
Yet she still comes back for more
Kevin
I washed my hands repeatedly in March, April and May,
I washed them in the morning, noon, and nightime every day,
And now I can’t pick up the soap, I’ve washed them clean away,
So I can’t shake hands with you,
(What the hell am I going to do?)

Given the first line & the last word:- Set in June 2020
Tony
Though told off for singing quite loud…
It’s a talent of which I am proud
My counter point singing
Leaves Alan’s ears ringing
But it pleases the rest of the crowd

Terri
I knew a young man in Birchgrove..
Got lost in a coastal Mangrove
As he chopped with his cutter
He was heard there to mutter
What I’d give for a wood burning stove


I knew a young man in Birchgrove..
Searched for a pirates treasure trove
In jewels I’m rich in
I’ll stay in your kitchen
Sit next to the pot-bellied stove.


Kevin
A past patient of mine known as Mary
Had a one night fling with a fairy
the result of her sins was a strange pair of twins
with wings and green eyes, most contrary.


A past patient of mine known as Mary
Developed a boil large and hairy
when I lanced the aforesaid,
out popped a strange head
And off flew a disgruntled fairy.

A past patient of mine known as Mary
Once developed a killer canary
Instead of a beak it had rows of sharks teeth
Which I thought particularly scary.


At whittling I am no slouch
But to do it sometimes you must crouch
So close to the ground
I really have found
That it’s safer to wear a string pouch.

I once knew a nurse known as Sally,
Who smelled of sweet Lilly’o’the Valley
When she entered a room
The medics would swoon
And bury their nose in her alley.

I once knew a nurse known as Sally
She was never one to dilly dally
She could shave a man’s bits
Without causing him frits
That’s Sally, the pride of our alley.

I once knew a nurse known as Sally
To all she was really quite pally
Men would walk her down
To her house in the town
And take her right up her back alley.

I once knew a nurse known as Sally
Said I hate patient who shilly shally
Kept a bottle of poison
Administered with poise and
Now she’s Sally the nurse from Death Valley.

I once knew a nurse known as Sally
Her plastic surgeon was Dr O’Malley
A nip and tuck there
My god what a pair
Now her nickname is silicon valley.

Alan
One day in my allotment did find,

For the gardeners I really did pine.
To a man they had mastered,
The art of getting plastered,
Homemade wine in the tool shed behind.

One day in my allotment did find,
That its lay-out I badly designed.
Manure I had spared,
Far too close to me shed,
Now the tea tastes like horse’s behind.

One day in my allotment did find,
That the mice (all three) were blind.
The French beans were gallic
The carrots quite phallic,
Pumpkins like Sabrina’s behind

One day in my allotment did find,
There gardeners did regularly dine.
My shed was the venue,
Red Deer on the Menu,
Stag or may behind.

One day in my allotment did find,
To the compost heap it had been consigned.
A brothel was planned,
For this sanctified land,
With a barrier for standing behind.

One day in my allotment did find,
A WREN being badly maligned.
She bent over my beans,
And split open her jeans,
And a voice said, “Avast Behind!”

One day in my allotment did find,
A strange bird of the feathery kind.
It had a head like a heifer’s,
Ate the hottest of peppers,
And flew backwards to cool its behind.

At squeezing my box I’m a whiz,
Though bookings are sometimes a swiz.

The last time I played,
I only got paid
With a half-empty bottle of fizz

At squeezing my box I’m a whiz,
But I sometimes forget what it is
That I’m supposed to be doing
When a lassie starts cooing
And My hornpipes are starting to fizz!